Autism spectrum disorder (ASD) is a term used to describe a spectrum of developmental disorders characterised by difficulties in social interaction, communication as well as stereotyped patterns of behaviour.

Autism spectrum disorder usually begins before the age of 3 although it can be difficult to detect before this age. Some children might show some signs of problems during the first months of their life whilst others may not show symptoms until they are 2 years old. The condition lasts through the whole of a persons’ life although there are some cases in which symptoms gradually improve as they grow older.

Onset of symptoms varies from child to child, but often emerge between the ages of 2 and 3. However, some children may show symptoms as early as 6 months old.  Studies have shown that 80-90% of parents noticed problems in their childs’ development by the age of 2.

A common feature of autism spectrum disorder is that children seem to have a typical development but then either fail to gain new skills or lose skills they had already developed.  The earlier symptoms are detected the better as early intervention is one of the most effective forms of therapy for autism spectrum disorder, thus it is encouraged to check any symptoms as early as possible.

In younger children the following might be indicators of autism spectrum disorder:

How is Autism Spectrum Disorder diagnosed?

When diagnosing autism spectrum disorder it is important to look at both behaviour and development of the child. The first step in making a diagnosis is a developmental screening which involves checking whether children are developing age appropriate skills. This can be carried out during a check-up at the paediatrician. If there are any concerns regarding the child’s’ development, an evaluation by a paediatric neurologist or a child psychologist/psychiatrist needs to be carried out in order to confirm the diagnosis. The Center for Disease Control (CDC) recommends that all children are checked for autism spectrum disorder during paediatrician visits at age 18 and 24 months.

There are a number of diagnostic tools used to help diagnose autism spectrum disorder:

Apart from these diagnostics tools there are also screening tools such as the MCHAT (Modified Checklist for Autism in Toddlers) or CSBS (Communication and Symbolic Behaviour Scales) which are very brief tools that are carried out by parents.  These tools are not making an official diagnosis and should not be used to replace a full diagnostic tool carried out by registered professionals.

What treatments are available?

Autism spectrum disorder cannot be treated by medication directly however there are a number of treatment options available.  Some children might benefit from medication to help control energy levels as well as to help their focus and attention.

The most effective form of treatment is early intervention – the earlier therapy is started the more likely results are to be seen.  Applied Behaviour Analysis, which is the method we make use of at Hand in Hand when working with children with autism spectrum disorder has been cited by the Center for Disease Control (CDC) as being one of the most effective forms of early intervention treatment. The Picture Exchange Communication System (PECS) is also highly effective in aiding communication and developing functional language. Additional therapies can also be introduced along with behavioural therapy such as:

What do Hand in Hand do when working with individuals with Autism Spectrum Disorder? 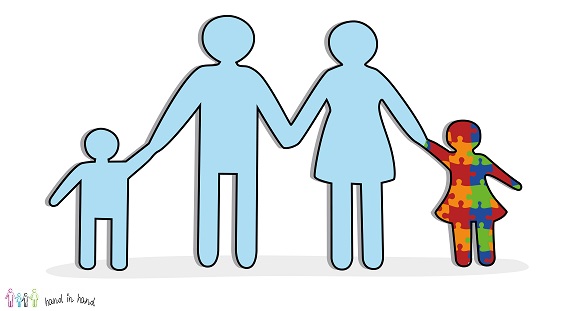 At Hand in Hand we make use of the Applied Behaviour Analysis (ABA) approach when working with children.  ABA is an evidence based therapy that is based on both positive and negative reinforcement in order to increase a desired behaviour or decrease behaviours that are not so desirable.

Our services take the form of one to one sessions with an ABA therapist lasting for an hour. Once a child applies for services an initial assessment takes place where a number of developmental areas and skills are probed.  The strengths and weaknesses are noted to as to ensure that once sessions start therapists will be working on what is most necessary.  Regular reviews are carried out every 6 weeks with more senior staff so as to assess progress and see what needs to be changed or added on.  We use the Discrete Trial Training (DTT) appraoch in which the child is given sessions that are learner directed and address the particular needs of each child.

We also offer Think Social Groups which is a form of group ABA therapy where up to 8 children work with 2 therapists on more socially oriented learning.  Groups focus on conversation skills, listening, sharing and how to react in different social settings among other things.

What resources are available for information on Autism Spectrum Disorder?

The Organisation for Autism Outreach (OAR) has published a number of guides for parents of children with autism spectrum disorder to help dealing with the different stages of diagnosis as well as helping children as they get older.

Autism Speaks is an organisation that offers information about the condition as well as support for parents of children with autism spectrum disorder through their life when dealing with different aspects of development.

This site uses Akismet to reduce spam. Learn how your comment data is processed.