Asperger Syndrome (AS) otherwise referred to as Asperger’s or Asperger Disorder is a neurodevelopment health condition that affects children and can extend into adulthood if not diagnosed in good time. The disorder’s name stems from Austrian paediatrician Dr Hans Asperger who was the first to describe its symptoms.

From his observations of a group of boys, he saw its linkage with impairments in socialization, communication and language, and restrictions in behaviour range. For a long time, it was a diagnostically distinct defect due to the distinguishing characteristics which made it different from related conditions such as Autism or Attention Deficit and Hypersensitivity Disorder (ADHD).

However, in the recent past, there was a change of perspective from specialists. Consequently, the principal reference book used by mental experts “The Diagnostic and Statistical Manual of Mental Health Disorders” DSM-5 in 2013 included it as an element of the broader Autism Spectrum Disorders (ASD). The World Health Organization (WHO) also buys this diagnostic definition.

Therefore, at the moment Asperger Syndrome is technically not isolated as before but is considered ‘high functioning’ form of Autism Spectrum Disorder.

Difference between Asperger Syndrome and the broader Autism Spectrum Disorders

Well, this has been the subject of the intense debate and still is as to whether AS should have a separate diagnostic definition from ASD.  In spite of the similarities, differences do exist. Those suffering from Asperger disorder unlike those with autism have no problem with early language development and cognitive skills. Some even possess extraordinary talent when it comes to these abilities. 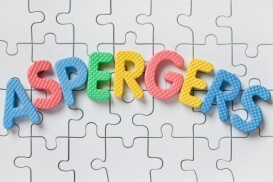 Currently, empirical evidence tells of no particular cause shouldering the responsibility for the condition. Nonetheless, medical experts suggest it could be as a result of genetic influences. This school of thought gets support from keen observations which show the syndrome is traceable through the family lines.

Other researchers claim that the environmental conditions such as exposure to toxins, problems during pregnancy or birth could be responsible for AS. These assertions as noted above are not supported by factual data or exhaustively proven but are products of preliminary investigations.

It is however agreeable that the impairment in children stems from brain development challenges. The only fact remains that Asperger Syndrome is more common in boys than the opposite sex.

The list below comprises of generally perceived indications linked to the disorder. However, they are hardly present entirely for a single case. Since every child is unique, the symptoms vary from one patient to another with equally changing manifestation intensities. To this end, it appears there is an apparent overlap of diagnostic symptoms to other related disorders.

Note: because the symptoms do vary a mere identification of any single isolated sign does not necessarily mean one is suffering from Asperger Syndrome. It could be something else which is only verifiable through diagnosis.

Just like many other health concerns early diagnosis plays a critical role in ensuring prompt mitigation yet this is not always the case. Sometimes it takes long because at the tender age a child can appear normal to the parents or they may fail to sense in good time. On the other hand, it may be misdiagnosed especially when you rely on doctors that may not be aware or lack training on the condition.

For many incidences, Asperger disorder becomes visible when the child begins to experience significant challenges with school work, or immediately they s/he gets exposed to a more open social environment.

Identifying the syndrome relies primarily on the focus on difficulties experienced during social interaction. Currently, there is no defined medical procedure employed to screen AS therefore it takes the form of behavioural evaluation by a specialized physician or psychologist.

At times diagnosis might require the input of multiple professionals such as speech and language experts, paediatricians, and psychologists. With a broader analysis covering neurological aspects, genetics, psychomotor function, and cognitive assessment among other things the process can be very involving. As such, it calls for attention from the right personnel because your regular doctor can easily dismiss or misdiagnose Asperger’s.

Even though the condition can exist without other psychiatric ailments such as ADHD, severe anxiety or hypersensitivity, it does have some effects on the child behaviour if not dealt with responsibly. For instance, it can lead to disruptive behaviour and other unwanted mannerisms as outlined in the symptoms.

It is also crucial to note that prognosis is almost impossible. However, there is some degree of certainty that if necessary support is available to the victim one can still lead a happy and productive life to adulthood.

Currently, no single fitting treatment formula can authoritatively deal with the condition. And having in mind the distinctiveness of each child in line with abilities, interests, and behaviours, what works for one may not serve the others?

Due to this, a blend of therapeutic procedures is commonly put to use as the intervention. The programs include social skills training, educational and social support guidance, speech-language therapy, and cognitive treatments. Notably, there is one outstanding treatment plan known as Applied Behavioral Analysis (ABA). Experts recommend it as the best method that can be utilized to handle Asperger’s efficiently.

How ABA can help children with Asperger Syndrome

ABA relies on scientific principles framed to extend science beyond the ordinary laboratory setting. The practice has three facets summarized from antecedents to behaviour to consequences. The analogy implies behaviour is traceable to the environment (antecedent), and it continues because of the results (consequences).

Though ABA appears structured, most professionals employing this mechanism will most likely tailor it to suit the needs of their patient. Applied behaviour analysis works by reinforcing positive behaviour and discouraging undesirable traits. Through systematic application, it serves to facilitate necessary changes that are crucial to getting back to healthy living in the following ways:-

Relying on daily life experiences and functional behaviour assessment ABA focuses on outcome-decision making. The information at hand is utilized progressively to identify influences and work towards mitigation.

Note that early intervention is very crucial in ensuring the victim of Asperger Syndrome gets better unlike when treatment starts late. In essence, it allows the individual lives a good and equally successful life.

I see you don’t monetize handinhandmalta.com, don’t waste your
traffic, you can earn additional bucks every month with new monetization method.
This is the best adsense alternative for any type
of website (they approve all websites), for more info simply search in gooogle:
murgrabia’s tools

This site uses Akismet to reduce spam. Learn how your comment data is processed.